As the CECL implementation deadline looms, the WARM method and SCALE method appear to be the most viable options for many community-based financial institutions.  While both methodologies have the advantage of being easier to understand and less expensive than alternative methodologies, there are vast differences in the models and long-term implications that should be considered before making a final decision.

The Scale method was introduced in response to the objections of many community bankers that CECL is too difficult to implement for smaller institutions.  Indeed, only banks with less than $1 billion in assets are eligible to use the model.  While this approach simplifies the calculations, it makes some big assumptions that may eventually prove to be challenging for community banks that decide to use the model.

There are basically two major new calculations in CECL that are not part of existing incurred loss models: lifetime loss rates and objective forward-looking projections.  The Scale method assumes that smaller institutions are incapable of calculating these components themselves, so they use large banks as a proxy.

All financial institutions with over $1 billion in assets are required to report their CECL reserves each quarter for six different loan categories.  Since these big banks considered lifetime losses and objective forward-looking economic data in their calculations, the Scale method allows smaller banks to piggyback on those calculations by taking the average reserves of big banks for the six categories and adjusting from there.

One big problem with this approach is the comparison group.  Below is a map of the banks with assets between $1 billion and $10 billion that the Scale method is based upon:

These banks are spread throughout the country, which often experience very different loss rates during economic cycles over the years.  While the peer group can be customized, most banks will have to use a very wide geographic area to obtain a reasonable number of banks to prevent any one bank from having too much impact on the calculations.  Loss disparities over time can often be substantial from one side of a state to another, let alone across the country.  There are often major differences between metro-based banks and rural banks as well, that can be very difficult to capture using the Scale method.

Loan type granularity cannot be overstated as a consideration when choosing between the methodologies.  The six pools available in the Scale method are construction, commercial real estate, residential real estate, commercial, credit cards and other.  The WARM method, on the other hand, can calculate loss rates for all twenty of the pools listed in call reports. 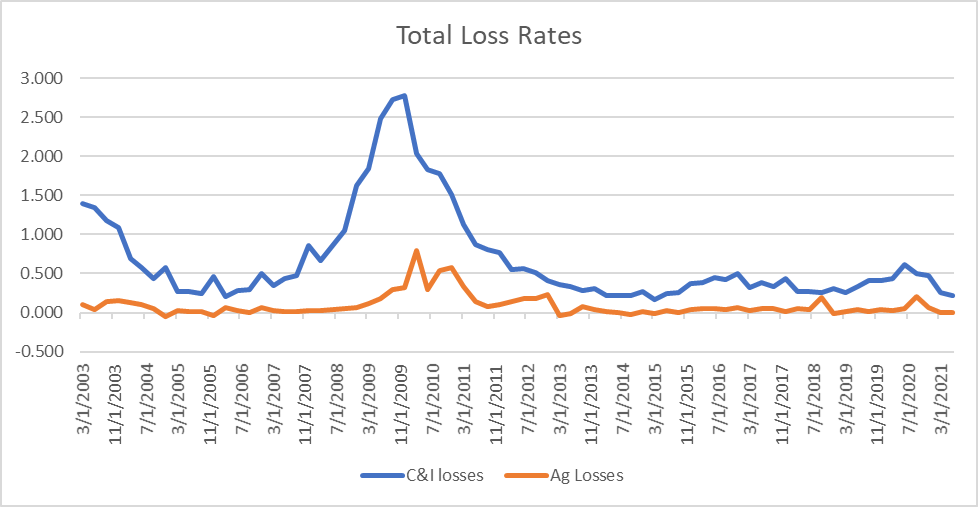 Loss rates have been very low in nearly every category over the past decade, so current Scale method reserve calculations may not be terribly high, even with these disadvantages.  However, we will go through another credit cycle at some point in the future, and when we do, the differences in geographic areas and loan types may result in vastly overstated reserve levels for community banks.  At that point, the cost advantage for the Scale method will be immaterial compared with loan loss provisions that will be required.

The WARM method, by contrast, allows banks to be much more precise in calculating statistically meaningful historical loss rates by using a large number of similarly sized banks within a targeted geographic area and stratifying their loan pools more appropriately.

In addition to calculating appropriate historical and projected loss rates, CECL requires banks to calculate the remaining life of their loans and pools.  These remaining life calculations are based on a bank’s existing loan portfolio and take into account scheduled loan payments, estimated prepayments and maturity dates.  Larger banks and community banks often have very different loan structures, which makes it imperative to understand a specific bank’s remaining life calculations to get an accurate lifetime loss rate.